Using Elmo to get children to take an experimental vaccine. What the hell?

Fr. Frank Pavone: The New Chapter In The Pro-Life Movement

Clear video of a cruise missile barrage being launched by a Russian warship in the Black Sea pic.twitter.com/by5y9zGxKv

More vids in other news to check out… 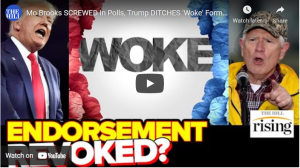 13 Coolest Gadgets That Are Worth Seeing

'Do You Believe Illegal Immigrants Should Be Allowed To Vote?': Lindsey Graham Presses Jackson

Using Elmo to get children to take an experimental vaccine. What the hell?

Fr. Frank Pavone: The New Chapter In The Pro-Life Movement

Mike Lindell: Get Out And Vote For Tina Peters

Jack Posobiec: Jan. 6 Committee Hasn’t Been Able To Produce Much Of Anything Of Importance

Todd Bensman: Migrants Are Dying Because Of Failed Policies

Tina Peters: It All Comes Down To Today; Get Out And Vote Colorado For Secure Elections

Rep. Tom Tiffany: “Mayorkas has lied to the American people”

Rep. Tom Tiffany: “It was predictable that this was going to happen”

Andrew Giuliani: Game Day For NYC, Get Out And Vote

Gov. Kristi Noem: Our Food Supply Is Threatened Because Of Biden’s Policy Changes

Hunter, His Dad giving him 5K for a hooker, and his begging the ho….

ESPN’s Kendrick Perkins gets TRIGGERED and GOES OFF on Draymond Green after he is called a C**N!

Gross Things You Should Know About Burger King

‘Both Debtors And Creditors Should Be Better Off’: GOP Lawmaker Touts Bankruptcy Bill

Someone Is Impersonating Me….

Happy Birthday to the US Army. 247 Years of Excellence Today…. It’s Flag Day as well… And President Trump’s Birthday!

Ronin 3: The Battle for Sangin (Trailer)